A sexy minivan Nissan concept goes for it

December 11, 2007
Is the battle for minivan buyers moving beyond the cupholder, nifty cargo bins and seating and into the modern media age?The lowly minivan is getting a radical makeover and communications upgrades in the form of the new Nissan Forum - a concept to be introduced at the North American International Auto Show next month. Minivan sales are dropping and some automakers are abandoning the segment altogether in favor of sexier crossovers. The slump has some automakers looking at real styling innovation and equipment upgrades to overcome the commodization of minivans by low-price Korean automakers, for example, analysts say. 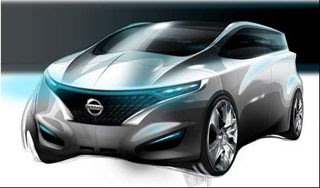 The Forum
- created by Nissan designers in La Jolla, Calif., and Farmington Hills, Mich. - is designed to shuttle the digital family with a little more pizazz. Like other recent Nissans, this one comes with an all-glass roof.It's a change taken right out of the playbook of Acura, which gave the boxy MD-X crossover a radical makeover more suited for a starring role in a Matrix movie.

Nissan first showed the Forum in November to journalists gathered in Las Vegas for the Specialty Equipment Manufacturers Association show - a gathering of purveyers of custom parts and accessories for pure enthusiasts.The SEMA show is not your typical venue for minivan followers, but Nissan turned up the volume just to be sure to make some noise.

The Forum's equipment includes an advanced Bose media system with proximity sensor-based information controller, a one-button audio muting system, 2nd and 3rd row monitoring cameras, and individual seat-mounted speakers for every row. And until the Forum arrives, you can always take NFL quarterback Peyton Manning's advice: add some flames to your favorite minivan.