December 11, 2007
Mitsubishi will add another version of the "world engine" four-cylinder family to its Lancer and Outlander models.The new 2.4-liter four-cylinder engine that will be installed in the compact sedan and crossover are essentially similar to the four-cylinders found in the Dodge Caliber and Jeep Compass. Chrysler, Mitsubishi, and Hyundai are partners in the joint venture that designed and developed the engines. 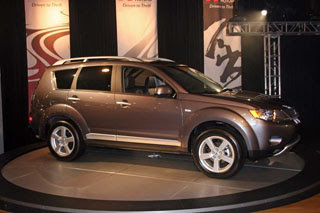 In its Mitsubishi installation, the new 2.4-liter four-cylinder makes 168 hp and 167 pound-feet of torque, and in both new models, it's coupled to a continuously variable transmission.

In the 2009 Lancer GTS, which goes on sale in the spring, the new engine turns in 16 more horsepower than the entry-level 2.0-liter four. Fuel economy with the 2.4-liter and CVT is estimated at 21/27 mpg. The CVT is programmed with six fixed ratios and equipped with paddle shifters. A five-speed manual will also be available.

Meanwhile, the new Outlander ES has already arrived in showrooms as a 2008 model. It'll be followed in the spring by a similar Outlander SE, also outfitted with the 2.4-liter engine, as well as 18-inch wheels, metallic trim and new seats, and the 650-watt Rockford Fosgate audio system.