It's official Focus RS on the way

December 18, 2007
It's finally coming. Ford has today confirmed that the second-generation Focus RS is on the way, and it's set to be the hottest Focus ever. 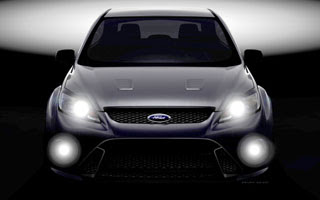 And, just to prove they're serious, the guys at Team RS have shown us a dark, teasing picture of the new RS. It looks mean.

Based on the new Focus ST but with bigger, blistered wheelarches, bonnet vents and a gaping front air dam with secondary side intakes, the RS is described as a 'no-compromise Focus for more enthusiastic drivers'.

Technical details are scant, but the RS seems likely to get four-wheel drive and a twin-turbo version of the ST's 2.5-litre five-pot engine. That should be good for some 300bhp and a 0-60 time in the five-second bracket - genuine competition for the Subaru Impreza STi.

Expect the RS to command a similar price tag to the Impreza, too. Despite a cult following, the original Focus RS - launched in 2002 - wasn't too profitable: Ford is reported to have lost £7,000 on every model. The new one is expected to cost around £25,000.

Ford says a concept version of the Focus RS will arrive some time next year, with the smart money on the London motor show in July. The production version will follow in 2009, giving us plenty of time to get all misty-eyed about RS-based Fords of old. Did someone say Cosworth?