December 11, 2007
As the 2009 Nissan Murano proves, Nissan figured out this whole crossover thing before the rest of us. It's pretty uncommon for a vehicle to actually gather increasing steam when it comes to sales as it gets older, but the Murano has done exactly that. Introduced as a 2004 model, sales of the Nissan Murano have climbed every year since then, reaching 81,000 units in 2006. 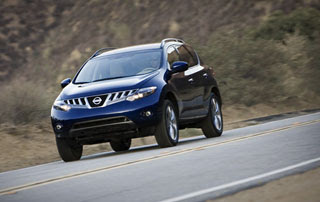 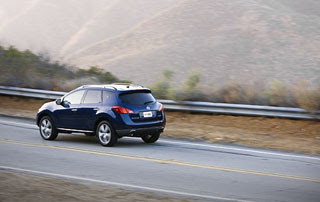 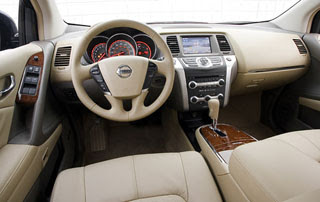 Evolution, Not Revolution
Now that the Murano has developed a loyal following, Nissan has been careful to evolve, improve and upgrade the all-new 2009 Murano without compromising the things responsible for its success. As we see it, these things have been the Murano's untraditional exterior style, its ample second-row accommodations and its engaging driving dynamics.

Good Performance
At the test track, the powerful 2009 Murano LE accelerates to 60 mph in 8 seconds flat, while its capable four-wheel disc brakes stop it from 60 mph in just 122 feet. These performance figures place it near the top of its class.

When it comes to handling at the limit, the 4,135-pound Murano circles the skid pad (unimpeded by the stability control, which can't be shut off completely) with 0.79g in lateral grip. Weaving through the slalom field, however, awoke the safety system and it allowed only a pass at 59.2 mph.

A reengineered suspension with lightweight aluminum pieces and a new steering system also make the Murano a willing and surprisingly communicative partner in daily driving. No doubt the combination of these chassis upgrades and a new predictive (not reactive) all-wheel-drive system (first introduced by the 2008 Nissan Rogue) contribute to the Murano's genuine agility and overall feel of predictability. And, contrary to what some might expect from the newly available 20-inch rolling stock (LE model), the 235/50TR20 Toyo Proxes A20 tires don't degrade the ride either.