December 05, 2007
Ever experience the Law of Automotive Similarity? You know, whatever you drive, you'll see it in great numbers? Well, we've been driving a 2008 Chevrolet Malibu LTZ sedan around for a couple of weeks now, and we've not seen very many other examples of any Chevy Malibu from recent model years. 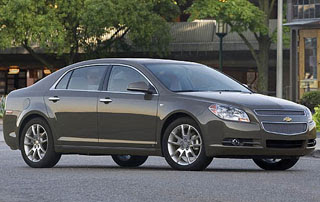 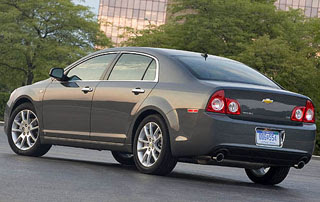 Just One Look
Sleek and handsome in the Dark Gray that Chevrolet has chosen as the car's signature color to help reinforce its upmarket aspirations, this car looks like the fitter, hipper younger brother when parked beside a dowdy '07 Malibu (still to be sold to commercial fleets as the 2008 Malibu Classic). And its straightforward design makes some of the Japanese competition seem downright quirky.

Drive Time
These and other basic dimensions come straight from GM's Epsilon chassis that the 2008 Malibu shares with the Saturn Aura. So it's no surprise that our top-level Malibu LTZ carries the same 252-horsepower 3.6-liter double-overhead-cam V6 with variable valve timing that we've seen in the Aura. Unencumbered by the low-revving pushrods and restrictive two-valve heads of last year's 3.5-liter GM V6, the LTZ sprints to 60 mph in an energetic 6.6 seconds, finishing the quarter-mile in 15.1 seconds at 92.9 mph.

Despite the best efforts of the transmission, the EPA-certified fuel economy of 17 mpg city and 26 highway remains a couple of points shy of the class-leading 2008 Honda Accord V6. We averaged 22.5 mpg over nearly 2,600 miles of combined driving, including a long-haul trip from Memphis to Los Angeles. Our Malibu weighed in at 3,643 pounds — within two or three bowling balls of an Accord V6.

Dollars and Sense
The price of the Malibu has gone up, but the overall design and quality impression has gone up more. Including destination charges, our test LTZ stickers at $27,245: $26,995 for the base LTZ plus $250 for a rear 110-volt power outlet.