December 11, 2007
Don't worry about old James Bond. Since he ditched his suits for a Speedo and took on a blond 'do, it's been rumored that he'd switch driving machines again--particularly since former Aston Martin owners at Ford have other vehicles they'd like to "prominently place" on movie screens everywhere. 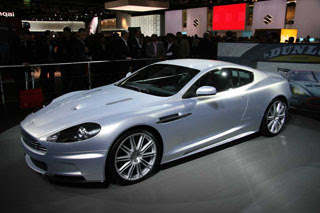 But for the new Bond movie in development--tagged only Bond 22 for now as a title is yet undecided--Daniel Craig will, once again, pilot an Aston DBS. Craig's first Bond flick, 2006's Casino Royale, saw him jet around in the Aston supercar for the first time, setting a Guinness record for "most cannon rolls in a car" at the same time. In that stunt, Aston reminds us, stuntman Adam Kirley rolled the DBS seven times for the cameras. (And we swore it was CGI!)

Bond's former Astons include the DB5 from 1964's Goldfinger, which features ejector seats and rockets. More recently, the Vanquish appeared in DIe Another Day.

The new Bond film isn't due until November of 2008, giving the community involved plenty of time to figure out how to get deadly new gadgets into the DBS.