December 11, 2007
Jeep's entry-level, compact Compass is a car-based crossover that shares its platform and drivetrains with the Dodge Caliber and its sibling, the Jeep Patriot.

Unlike traditional Jeeps - which have historically been serious off-roaders with four-wheel drive and low-range gearing, the Compass is a front-wheel-drive vehicle with lighter-duty all-wheel drive as an option. Though the optional "Freedom Drive" system can route as much as 60 percent of engine power to the rear wheels, the absence of Low range gearing means the Compass is primarily an on-road vehicle and should be compared with similar car-based crossovers. 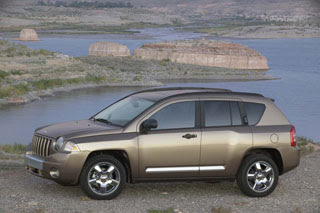 The standard Compass engine is a 2.4-liter, four-cylinder rated at 172 horsepower, available with either a five-speed manual or a CVT. The '08 Compass comes in Sport and Limited styles, with 17-inch wheels, stability and traction control, anti-lock brakes, and curtain airbags as standard equipment on both versions.

Three new colors are offered for 2008. In addition, air conditioning is now standard on all models, as are tire pressure monitors. There's more chrome trim inside, and a navigation system is now available on Limited models. The Compass' continuously variable transmission has been updated with better responsiveness and new AutoStick control.