December 11, 2007
General Motors is known to have had its eye on the niche occupied by the Jeep Wrangler. And at the Detroit auto show next month, it may reveal more of its intentions to field a Wrangler competitor in the shape of the HUMMER HX concept. 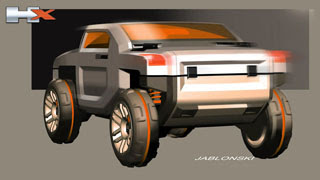 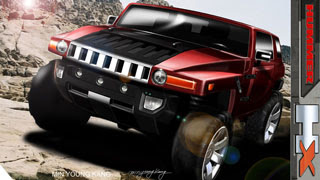 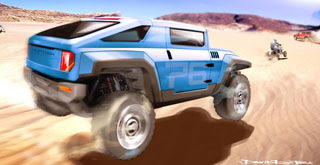 The HX Concept, shown in sketches at a GM press event today, also embodies some of the off-road hallmarks of the Toyota FJ Cruiser. BUT GM says the design of the new HX concept is all HUMMER, even though it's the work of three new designers.

David Rojas, Min Young Kang, and Robert Jablonski are the artists GM assigned to envision a future off-road vehicle for the HUMMER brand. All three are graduates of the College for Creative Studies in Detroit. The vehicle would have to evince HUMMER's off-road credentials while passing muster with Carl Zipfel, the director of the brand's design studio.

The resulting HX concept shares some elements with other HUMMER vehicles, like its flex-fuel-capable powertrain. But as the HX model is smaller and is a two-door vehicle, it has some stylistic touches uncommon to other HUMMER vehicles. The roof, for example, has removable panels and a removable rear roof that converts the HX from hardtop to an open-air vehicle with a short truck bed. The doors and fender flares are removable, too.

Stay tuned for more pictures and details on the HX concept as TheCarConnection.com covers the Detroit show debuts through January 15, 2008.