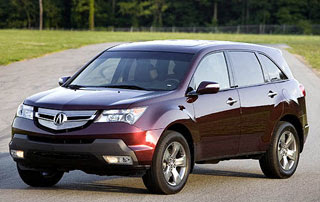 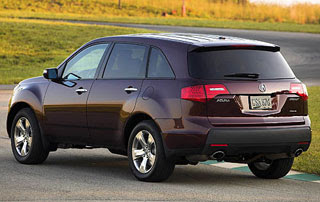 Introduction
The term "performance SUV" comes very close to being an oxymoron. Really, if your number-one goal is performance, a big and boxy sport-utility is usually a poor choice to go about getting it. But for consumers who really like to drive, yet have certain constraints in their life that require an SUV (read: a family), such a vehicle can make a certain amount of sense. Enter the 2008 Acura MDX.

Acura's midsize luxury SUV was redesigned last year. As with the first-generation MDX, it's a car-based crossover SUV with V6 power and seating for seven. But the new model is considerably sportier. It's powered by the largest and most powerful V6 ever to grace an Acura (yes, including the NSX), giving it unparalleled juice and athleticism. With it, Acura promises V8-like performance while still maintaining respectable fuel economy.

Powertrains and Performance
The MDX's sole engine is a 3.7-liter V6 rated at 300 horsepower and 275 pound-feet of torque. The engine is mated to a five-speed automatic transmission with manual shift control, and power is directed to all four wheels through an advanced all-wheel-drive system. In testing, we found the MDX can sprint to 60 mph in 8.1 seconds. Fuel economy, with a 2008 rating of 15 mpg city/20 mpg highway, is average for this segment. When properly equipped, maximum towing capacity is 5,000 pounds.