October 21, 2007
Low, sleek and yet self-consciously aggressive, the 2008 Aston Martin DBS is the ultimate expression of the contemporary Aston Martin.

The 2008 Aston Martin DBS is the car that Aston CEO Dr. Ulrich Bez describes as "thunder and lightning." Aston Martin must achieve the prestige of Ferrari to survive as an influential manufacturer of sports cars, and that means the DBS must measure up against the Ferrari 599 GTB Fiorano. 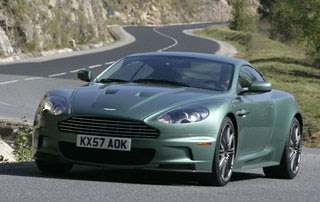 A Surprising Start
For the DBS, Aston Martin presents you with a plastic controller topped with a crystal, described as an ECU — Emotion Control Unit. (Well, it'll be stainless steel and a sapphire if you actually pay the $265,000.) It slots into the center of the starter button, which then glows warmly red as the 5,935cc V12 comes to life.

This is the same Ford-designed engine featured in the DB9, still assembled by hand in Cologne, Germany. It's been slightly revised for the DBS, and the changes include a taller 10.9:1 compression ratio and a bypass valve in the intake tract that opens at 5,500 rpm to admit more air into the engine at peak rpm. The upshot of this is a 60-horsepower hike in power from the DB9's 450-hp calibration to 510 hp at 6,500 rpm. The torque output remains unchanged at 420 pound-feet, available at 5,750 rpm.

The deep, rich tone from the V12 engine is instantly familiar, now a signature of Aston Martin. Reach out for the shift lever of the six-speed manual transmission (an automated sequential manual will be available later), and slot into 1st gear. The shift action is heavy, as you would expect from a rear-mounted transaxle required to process so much power, yet it's precise and manageable, while the clutch action is light and linear. The DBS might be powerful, but it's not intimidating.