We've already seen the stellar Ford Mondeo and the, erm, conservative Renault Laguna, as well as Mazda's new 6, and now Citroen has released the first official pictures of its all-new C5. 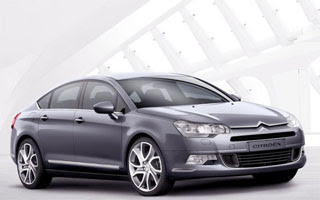 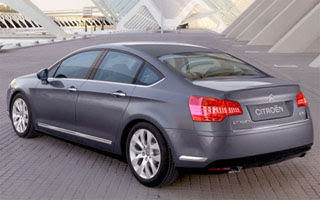 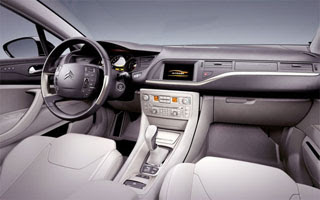 The C5 is a big car for Citroen, and it's a big car: larger than its predecessor in every direction. The saloon - there's no hatch version to be offered - is 16cm longer, 9cm taller and a couple of centimetres wider, while the estate is even bigger.

And they both look good. The sleek lines of the C5 owe much to its big brother C6, and it looks like the executive levels of comfort are to be carried over, too.

That means the C5 gets a whole bunch of clever kit, most excitingly an optional massaging drivers seat. Whether it'll come with a 'full finish' function is as yet unclear.

The C5 also debuts the second generation of Citroen's fixed-centre steering wheel, meaning that vital controls will stay where they are no matter how much you spin the wheel.

Cruise control and a speed limiter are also fitted as standard, while top-spec C5s will get, well, just about everything.

Two suspensions set-ups are available: a conventional coil-spring arrangement with double wishbones at the front and multilinks at the rear, or a Citroen trademark hydropneumatic set-up. The Hydractive self-levelling suspension has three modes, ranging from 'Soft' to 'Sport'.

There are plenty of engine options: 1.8- and 2.0-litre petrol engines and no less than four diesels, the most powerful of which is a V6 that develops 208bhp.

The new C5 will go on sale in the UK early next year. The Year of the Big Family Car looks set to run and run...