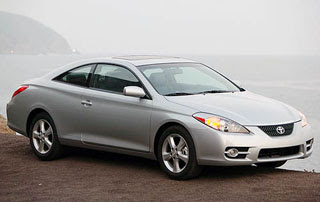 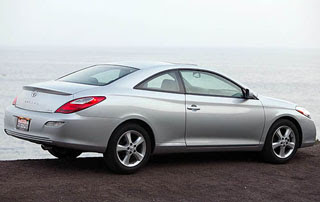 Introduction
Usually, the two-door variants within a model line are flashier and sportier than their four-door counterparts. This was true of the Toyota Camry Solara coupe and convertible right after they were redesigned back in 2004. Since then, though, they've been upstaged by the Camry sedan, which grew more powerful in last year's overhaul. The injustice continues into 2008, as the Solara siblings stand pat while winds of change swirl around them. Rival import-brand manufacturers have launched better-performing, edgier-looking coupes, and relatively affordable hardtop convertibles are crowding into soft-top Solara price territory.

The Solara's diminishing appeal is due at least in part to its exterior styling, which although curvy and sophisticated, has never come across as trendy or youthful. This is particularly true when you look at the car from the back, as the rear deck appears to droop on both the coupe and the convertible. Another issue is the car's lack of verve once you're behind the wheel. The Solara coupe is fairly quick when equipped with the V6, but in the heavier convertible the engine's modest low-end torque and the transmission's slow responses noticeably detract from performance. And although handling is stable and predictable, the Camry Solara is not the sort of car you'll revel in driving briskly, given its soft suspension and minimal steering feedback.

Powertrains and Performance
The standard engine for the Toyota Camry Solara coupe is a 2.4-liter four-cylinder rated at 157 horsepower and 158 pound-feet of torque. It can be paired with a five-speed manual or five-speed automatic transmission, either of which drives the front wheels. Optional on Solara coupes and standard on convertibles is a 3.3-liter V6 rated for 210 hp and 220 lb-ft of torque. A five-speed automatic is standard with the V6. The EPA rates four-cylinder coupes at 21-22 mpg in the city and 31 mpg on the highway. Upgrade to the V6 and you're looking at an 18/27 rating in the coupe and 18/26 in the convertible.