October 29, 2007
Presenting the new 911 GT2 at the Frankfurt Motor Show, Dr. Ing. h.c. F. Porsche AG, Stuttgart, is proudly launching the most powerful 911 so far homologated for road use. 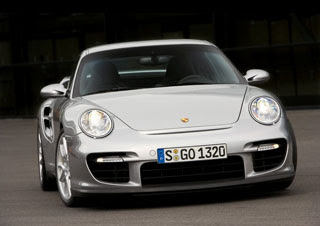 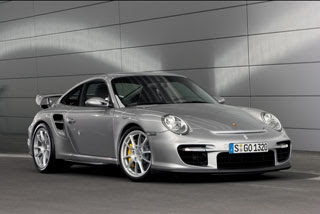 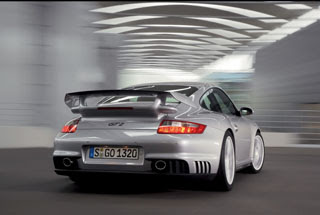 Through its striking design with large air intakes at the front and the rear wing so characteristic of this very special model, the new 911 GT2 expresses the power and performance potential of the fastest-ever 911 right from the start even at a standstill. Available exclusively with rear-wheel drive and a manual six-speed gearbox, this high-performance athlete accelerates to 100 km/h in just 3.7 seconds and reaches a top speed of 329 km/h (204 mph) on average fuel consumption of just 12.5 litres/100 km (equal to 22.6 mpg imp) in the New European Driving Cycle (NEDC), thus offering a level of fuel economy regarded as quite impossible in this performance class just a few years ago.

The increase in engine power by 50 bhp over the ”regular“ power unit is provided in the new 911 GT2 by two turbochargers with a larger compressor wheel and a flow-optimised turbine housing raising turbocharger pressure to an even higher level. And for the first time Porsche’s engineers have combined the turbocharged engine with an expansion-type intake manifold – a genuine revolution on turbocharged power units.