October 29, 2007
What's New for 2008
The 2008 Mercury Mariner gets a makeover inside and out. A more aggressive attitude marks the exterior design, and the cabin is more attractive and functional. The chassis and powertrain are virtually unchanged, however, meaning this "redesigned" Mariner has the same running gear as before. 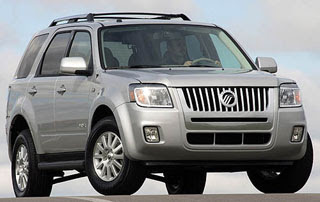 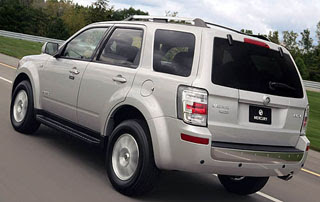 Introduction
Something of an anomaly in the marketplace, the compact but upscale Mercury Mariner SUV gets a not-so extreme makeover for 2008. The Mariner debuted three years ago as a more luxurious version of Ford's Escape. And like its relative, the Mariner's "top-half" revamping for this year means new sheet metal and a revised interior but no significant revisions to the chassis or running gear.

The changes in the looks department include a bolder grille, taller beltline and higher hood, all of which give this junior sport-ute a more aggressive curbside presence. Inside, the changes are more functional, including such touches as a multifunction display at the top center of the dash and cool blue instrument lighting. To promote a quieter cabin, the new Mariner features an acoustic laminate within the windshield, a redesigned roof panel and thicker carpeting.

Unfortunately, these changes might not be enough to keep the 2008 Mercury Mariner competitive in the small-SUV class. In past years, we praised the Mariner for its relatively roomy (for four) cabin, sporty driving dynamics and peppy performance, but new and more modern competitors now surpass it in many areas.

A more serious disappointment concerns the Mariner's braking. For some reason, all 2008 Mariners except the V6 AWD version have reverted to rear drum brakes (they formerly had discs all around) and braking performance suffers. In our testing of a similar Escape with rear drums, the best stop from 60 mph took 154 feet — about 25 feet longer than average.

Powertrains and Performance
All versions of the Mercury Mariner can be had with either front- or all-wheel drive. A 2.3-liter inline-4 rated for 153 hp and 152 pound-feet of torque powers the base Mariner. The base V6 and Premier models come with a 3.0-liter V6 good for 200 hp and 193 lb-ft of torque. Both engines come with a four-speed automatic transmission. Properly equipped, the V6 Mariner can tow up to 3,500 pounds.