October 21, 2007
(from BMW Press Release) Building on last year’s updates, BMW’s 2008 5 Series Sedans and Sport Wagon receive another significant freshening and, in the case of 6-cylinder models, a major boost in power and efficiency. Complementing the power increase, a thoroughly revised interior, new technological features and a freshened look front and rear ensure this benchmark collection of rear and all-wheel-drive Sedans and Sports Wagon will maintain their place at the forefront of the mid-size luxury class. 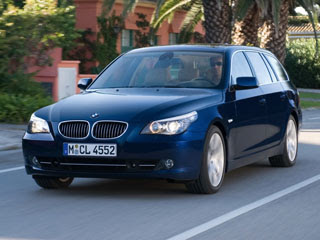 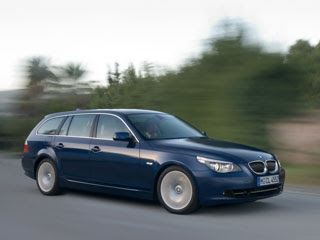 These early March 2007 release of the 2008 5 Series models represent the most significant update since their introduction in late 2003 as 2004s. Adopting the new engines introduced in the 3 Series Coupe, the 6-cylinder Sedans and Sport Wagon receive new model designations, reflecting a marked boost in power.

New technological features also make their appearance for ’08. First among these is BMW’s Lane Departure Warning system, a camera-based system that monitors lane placement, and discreetly notifies the driver via mild steering wheel vibration of any motions that might indicate an inadvertent lane change. The convenience of Active Cruise Control is extended via a new Stop and Go feature, which enables the system to function even in heavy traffic. Active Cruise allows the vehicle to come to a complete stop without losing its setting, then accelerate back up to set speed with only a touch of the accelerator pedal from the driver..

With all these changes for 2008, BMW’s 5 Series again reasserts itself as the class leader in the midsize performance-luxury field.