December 14, 2007
In a very brief release this morning, Honda confirmed its next-generation Pilot crossover will be shown as a concept at the upcoming Detroit auto show. 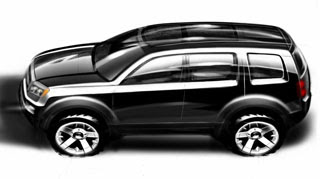 The current-generation Pilot offers versatile eight-passenger seating and all-weather, medium-duty off-road capabilities while earning a distinctive reputation in the midsize SUV class for its refined handling and ride comfort. Among its numerous accolades, the Honda Pilot has earned Car and Driver magazine's prestigious "5Best Truck" award for six straight years (2002 thru 2007).

Additional Honda vehicles to be on display at NAIAS include the FCX Clarity hydrogen fuel cell vehicle, introduced at the 2007 Los Angeles Auto Show, and the CR-Z concept vehicle, introduced at the 40th Tokyo Motor Show. Limited retail marketing of the FCX Clarity will begin in summer 2008. The CR-Z is a next-generation lightweight sports car concept equipped with Honda's original gas-electric hybrid system.