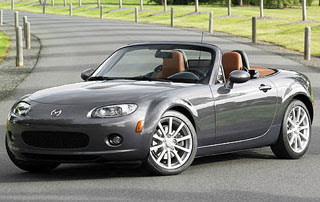 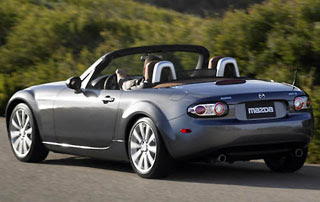 Introduction
In today's "let the gizmos handle it" world, where some cars offer not just cruise control so advanced that it can stop the car if need be, but also a warning system that alerts a driver who starts drifting out of his lane, it's easy to forget the simple joy of fully involved driving. Should you need to be reminded, we highly recommend the 2008 Mazda MX-5 Miata.

Since its debut nearly two decades ago, the Miata has won over legions of driving enthusiasts and earned accolades from auto critics and consumers alike thanks to its entertaining drive and impressive reliability record. It was fully redesigned two years ago for more comfort and performance without losing any of its elemental appeal. Last year, Mazda introduced the power-retractable hardtop (PRHT) version. The Miata PRHT offers the comfort of a coupe when its top is up as well or the full roadster experience when down. It doesn't even exact the weight penalty one may envision, as Mazda says the PRHT weighs just 70 pounds more than the ragtop.

Powertrains and Performance
All Miatas come with a 2.0-liter, four-cylinder engine that makes 166 horsepower (158 with the automatic transmission) and 140 pound-feet of torque. A five-speed manual transmission drives the rear wheels on SV and Sport trims, while a six-speed manual is fitted to the Touring and Grand Touring trims. A six-speed automatic with paddle shifters is optional on all but the SV and the Sport PRHT.